So in these last few days of purchasing games for stocking stuffers what should you look for? Well, that all depends on exactly who you are buying for.

A few things that will always be present at any big box store will be the usually collectible games (ie: Magic: The Gathering, Pokemon, or Heroclix). However recently there has been some new games to hit this market.

One such game you should look for is Force of Will. This is a new trading card game that came out some time last year but recently has started hitting the large retail market. If you have played Magic: The Gathering then you will probably like this game as it uses some of the same basic mechanics.

Now my favorite of all stocking stuffers is Wizkids very own Dice Masters. Dice Masters will probably be the most inexpensive game you may ever start to collect. With the starter boxes starting at $14.99-$19.99 & boosters at only $1 a piece you can give your children or your gaming friends a instant playable collection.

Dice Masters runs the gamut from DC Comics to Marvel Comics to Dungeon & Dragons & around to Yu-Gi-Oh!. Dice Masters makes a fun game for two people to sit down & play a variety of forces from the roleplaying world to the comic book universe.

Three games you should really keep your eye out for are published by Gamewright Games. Two of which are really quick dice games.

One such game is Rolling America. A dice game where you are using colored dice that represent different colored zones of the United States. When the dice are rolled each player matches that number to that particular zone which represents various states. If a player is not capable of writing a number down on one of those states then they must mark it with a X. At the end of the game the player with the fewest X’s wins the game. Rolling America can also be played as a solo game. 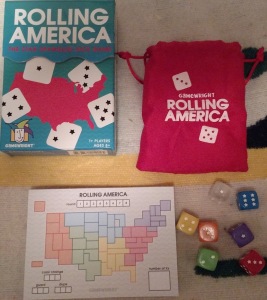 The second game to look for from Gamewright Games is Qwixx. Another fast-paced dice rolling game. In Qwixx players will take colored dice & mark off numbers that are rolled according to their game sheet. Players must be careful what they mark off though. Once a number is marked on one of the lines then they can’t go backwards. The player with the highest score according to the scoring chart wins. Qwixx happens to be in my top ten favorite games to play.

Most if not all of these games can also be found, hopefully, at your local game store. Do make sure to visit your local store for the holidays. Show them that you love them.

All these games plus the collectible games we have all grown up with with that love hate relationship are great for that quick last minute stocking stuffer.

I hope every one has a wonderful Christmas & game on!