I’m sure a majority of people have dreamed about going back or moving forward through time. It would be a dream to maybe change the change history (which you shouldn’t because bad things could happen) or maybe see what the future is like.

I have my ideas for traveling back in time but that is neither here nor there.

In Chicken Time Warp players will take on the role of one of six chickens who get lost in the time stream. The only way out is to escape through the Escape Window by way of the Escape Pod.

At the beginning of the game all eleven timeline cards face-down across the table in order from ten to the Escape Window. This represents how many minutes have passed. The You Dead and Time Slips Away cards are placed aside while the rest of the cards are shuffled.

On a turn a player will take three actions. They will flip over a timeline card, play a card from their hand (this is optional), and then draw a card from the deck and add it to their hand.

If a player happens to draw a You Dead or Time Slips Away card then they must immediately play it.

A player who has died and can’t bring revive on their own then they must wait for another player to play a Clux Capacitor. If the timeline card that they died on is flipped over by way of another Clux Capacitor then they revive and can resume playing.

Now if a Time Slips away card is played the highest number card on the timeline disappears and is removed from play. If a player who has died is left on one of these cards then they are erased from history never to have existed and are completely out of the game. 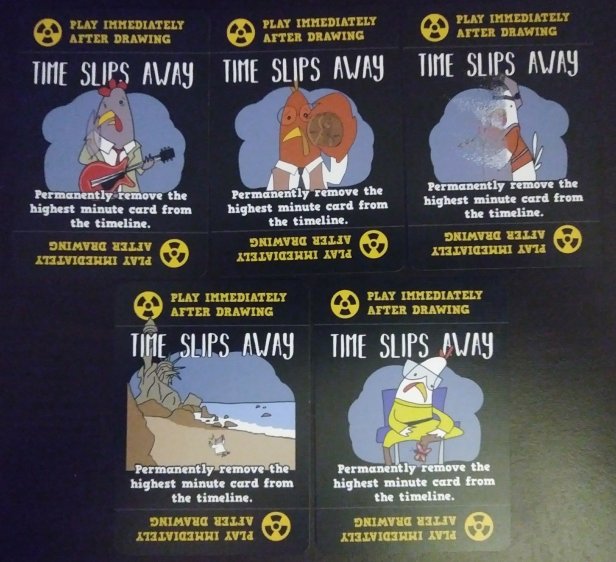 When the Escape Window is finally revealed the player with the Escape Pod card can escape on their next play. In order for other players to stop that player from escaping then they will want to play cards like Peek-A-Boo to sneak a peek at an opponents hand and then on their next turn play Swap Hands or Super Thief to get a card they want or need. A Swap Hands card can be negated by any player with Swap Block. 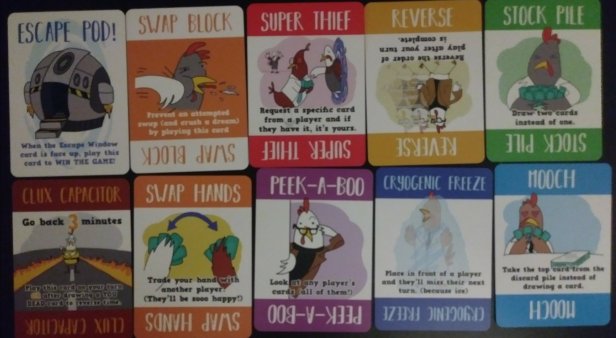 Players can also play Mooch to take a card from the top of the discard pile (except for You Dead or Time Slips Away). It is important to note that a player can really mess with another player by using a Cryogenic Freeze card to force them to lose a turn. And if a player really needs cards and feels lucky then they can play a Stock Pile card.

Players must be able to time things out. Setting up a good move can prove to be key especially toward the end of the game. Peeking with a combination of swapping or freezing will completely screw over a player. The hint is to not target one player, this will not in anyway to win the game. Since there is a limited number of cards players must pay attention to what is being played.

This is a fun game. It’s compact, which means it can be taken any where as long at you have about two feet of space. Chicken Time Warp would make for a great bar game to fill the time waiting for drinks and appetizers. Each game I have played took around twenty minutes and that was with three players so I could see it going faster six.

Chicken Time Warp was a really successful Kickstarter. If you are interested in purchasing a copy it can now be purchased here:

You can also watch how the game is played at the link above.

This is definitely a game that I can recommend for some friendly time traveling fun. Can you be the one to escape through time or will you get left behind?